While I wish I could say this week that my children never complained about the food they ate nor did they argue or fight over their many toys, art supplies, etc. Because, as we learned about a country in need, of course I would have loved for the message of how blessed we are to sink in.

The other side to this is that as much as Ethiopia is a country in need, they also have much to offer and teach us. And, with what eludes our nation with wealth and material possessions, we also could be considered a nation “in need”, in need of knowing what true values are.

So, as we did talk a lot about the struggles they have had in Ethiopia, we also focused on the many wonderful aspects of this culture, their deeply rooted faith, ability to work hard (we even practiced walking with baskets on our heads) and more. I thought a lot about our final dinner, debating whether or not to just serve a bowl of mush and show the extreme differences in what we’ve been given, but, in the end I decided that would be doing a disservice to Ethiopia. For while I want our kids to recognize what they’ve been given,  I also want them to recognize what other cultures have to offer.

The lazy side of me also felt it would be easier to just serve mush, knowing I have to start from scratch learning a new menu again. But alas, I mustered up some energy–after a few days off from a minor operation–and tonight we gave thanks for Ethiopia, just a few days late. 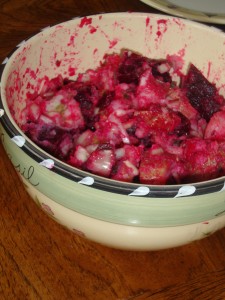 We really liked the dinner, especially the Honey Bread and the Beet and Potato Salad.  The chicken was nice, too, but I made the milder version hoping the kids would eat it. The injera bread didn’t have much flavor, but, when used to soak up the sauces (which is what it is for), it really was good and the kids ate theirs up quite quickly. Even Addie enjoyed the beet salad which might be the twenty-fifth time I’ve tried to get her to eat beets. There was a hint of jalapeno in the salad so Tallinn needed his rinsed off, but I was happy he ate some. I have to admit that I was pleasantly surprised with this dinner as several warned me that Ethiopian food is much different from ours. All of the recipes except for the Injera were found on epicurious.com which usually proves to be a good source.

Ethiopia, Amesegënallô (thank you), while we only had a small taste of all you have to share, we feel a closer connection to your nation and your people and are thankful we were able to visit.

This entry was posted in Countries, Ethiopia, Recipes. Bookmark the permalink.

3 responses to “The Final Dinner Debate”